Like many people, George Parsons’ depression descended on him in his teens. He didn’t complete high school and found himself in the working world at a young age, first in kitchens and then providing technical support at a computer store in Halifax.

Work was more about getting by than it was about fulfillment. “Maintaining,” is what George calls the mode he was in for two decades. “Keeping a roof over my head and food on the table. Fighting off the depression. Trying not to let it get the better of me.” 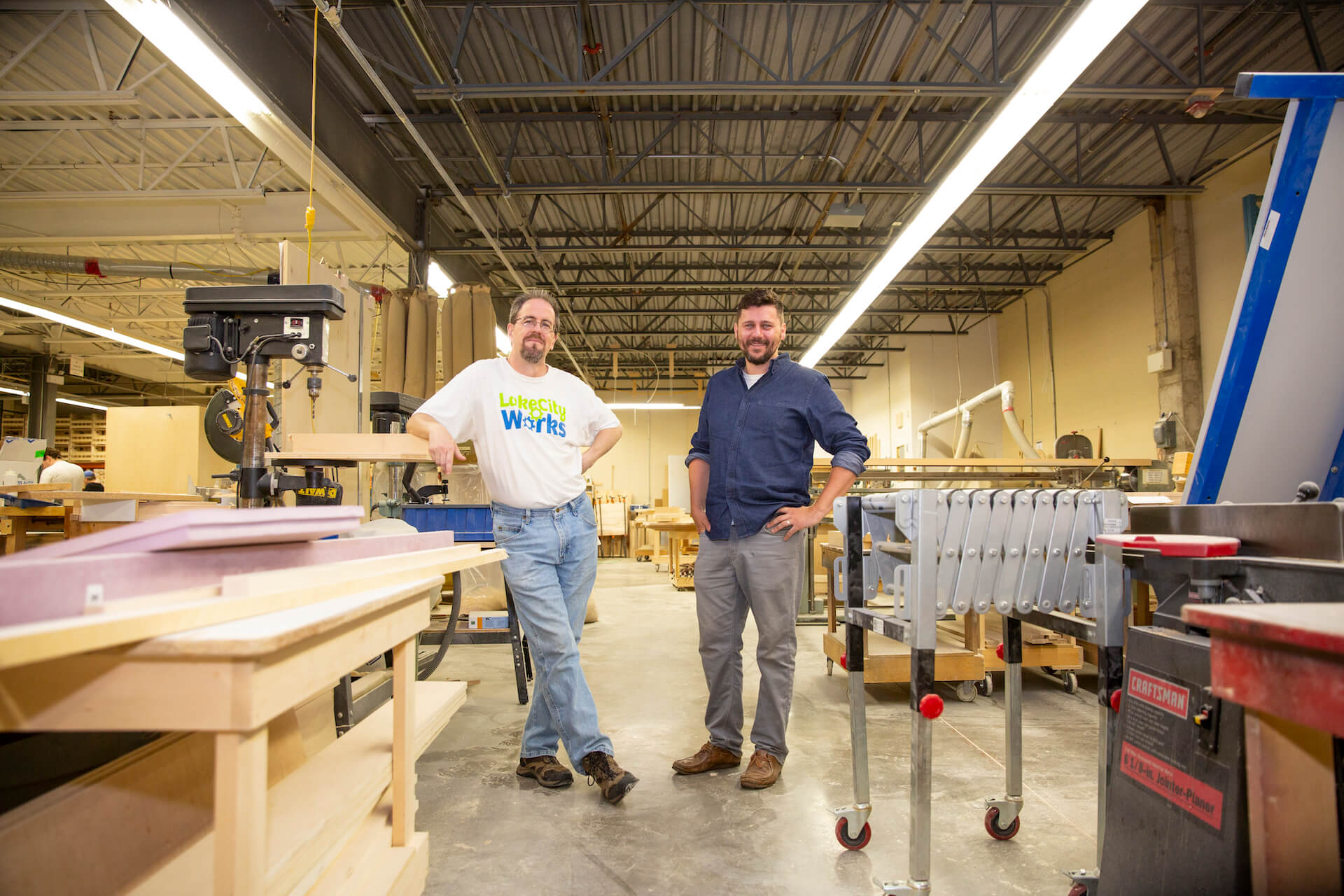 According to Statistics Canada’s most recent community health survey, 11% of Canadian adults experience major depression at some point in their lives. Often minimized, misunderstood, or a source of shame, depression can end up existing in the shadows, leaving people to battle it alone. Undiagnosed or untreated, depression can have cascading, sometimes devastating consequences.

In his mid-40s, George felt himself sliding deeper into his depressive cycle. He lost his job at the computer shop. He stopped going out. He stopped talking to people. He couldn’t pay rent.

“I knew I had to find a way out,” he says. “I needed to get on a sustainable path to something interesting.”

George found a therapist and an employment counsellor, who pointed him to Lake City Woodworkers, an organization in nearby Dartmouth, Nova Scotia, that offers skills-building programs for people with mental health issues. George started working in its woodworking shop, assembling wine racks. For George, the work itself — cutting, sanding, drilling — was fine, but what made the experience exceptional was the workplace culture.

For George, the work itself — cutting, sanding, drilling — was fine, but what made the experience exceptional was the workplace culture.

“In the regular working world, the focus is usually on getting the job done, regardless of everything else,” he says. “Here, the emphasis is on supporting the people doing the work. It’s a bottom-up approach and it really works.”

At Lake City Woodworkers, which was established in 1972, clients with mental illness work alongside full-time professional woodworkers. The clients gain work experience and are paid a stipend. Ideally, the program acts as a stepping stone to full-time employment elsewhere.

For George, the step only took a year and didn’t involve moving on, thanks to changes in the global waste market. Halifax has been contending with serious plastic disposal challenges ever since China — previously a major buyer of Canadian recycling — tightened its purchasing standards. Rather than send its plastics to out-of-province landfills (Nova Scotia does not allow plastics in its own), a local recycling company proposed a partnership with Lake City Woodworkers, in which it would convert the waste into plastic lumber to be made into fence posts and patio furniture. George was asked to join this new team as a full-time employee.

George’s voice brightens as he describes his work and the premise of the project: turning garbage into something useful.

“It’s a strange feeling,” he says, of the prospect of a solid income, a job he looks forward to, and the very fact that life has taken a turn in his favour.

“Where I could be myself,” he says, “acknowledging that I face barriers, but realizing they don’t have to be obstacles to my goals.”

George is not at all concerned about working in a new setting. The year at Lake City Woodworkers boosted his confidence. It didn’t take much — just a sympathetic supervisor who was available to chat if George wanted to, and knowing that he could take a few minutes off without being asked why. “Where I could be myself,” he says, “acknowledging that I face barriers, but realizing they don’t have to be obstacles to my goals.” In that environment, George found he didn’t have to worry about the challenging “moments” he sometimes has. He also found himself having less and less of those moments. 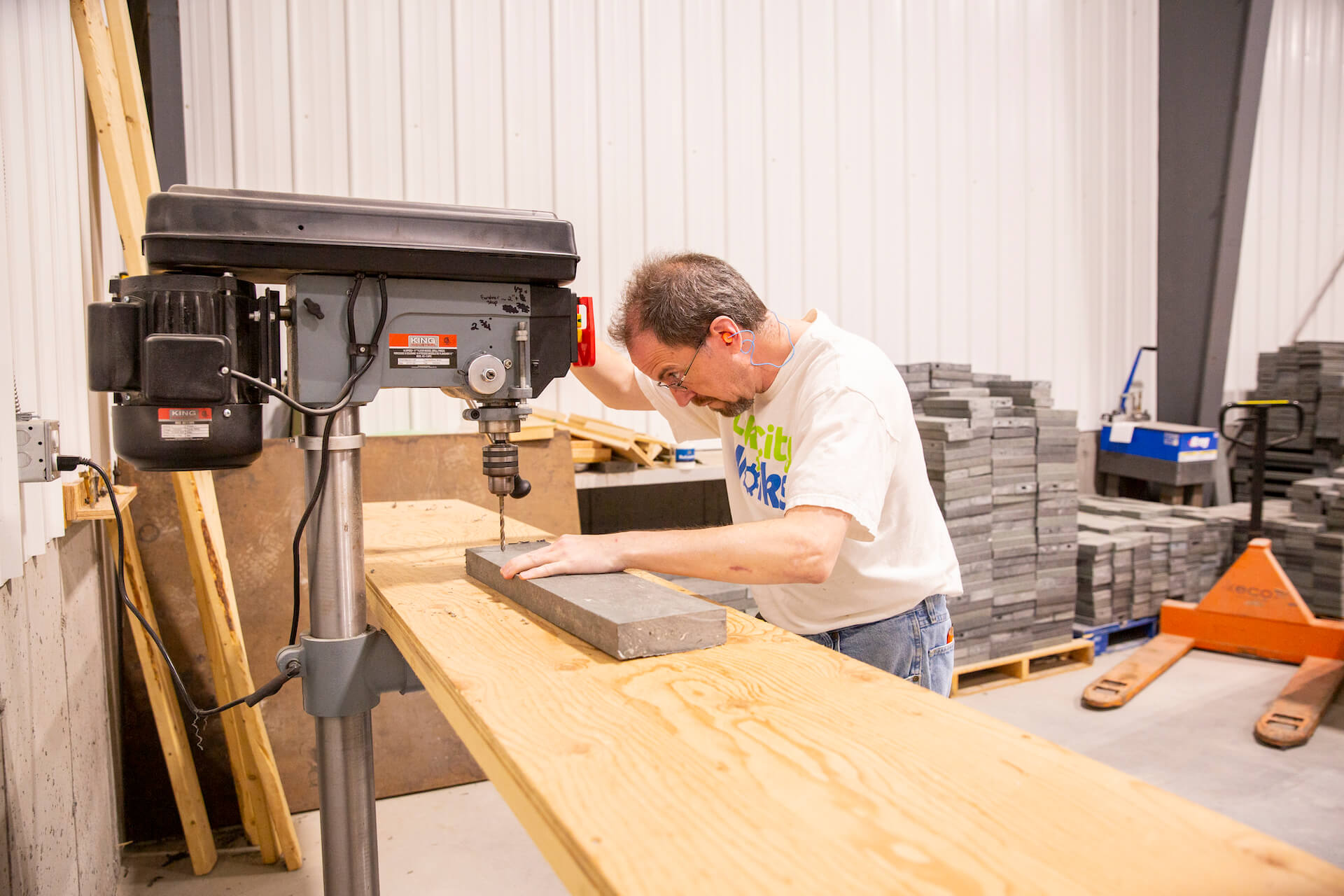 The plastics workshop has already produced a few prototype picnic tables, destined for municipal and provincial parks. George says they are made from 100% recycled material, and are recyclable, durable, and will be easy to maintain. As the tables sit outside, being tested for weathering, the calls keep coming in from prospective buyers.

“I’m super-excited to be making change in more than one way,” says George, who feels he’s found that sustainable path.

1 in 5 Canadians experience a mental Health problem or mental illness each year. With a workforce of just over 18 million people, this means that 3.6 million working Canadians have experienced, or will experience, some form of a mental health concern this year.
72% say they felt their mental
health issue will hurt
their career potential.

Globe and Mail and Morneau Shepell. (2017). The Mental Health Experience in Canada’s Workplaces.