Maayan Ziv has vivid childhood memories of her kindergarten playground, but they’re not happy ones of fun and games. They are memories of all the things she was not able to do — skip, run, jump, and climb — like the other children.

Maayan was born with muscular dystrophy. Now 29, she has only ever known the world from the perspective of a wheelchair. Instead of allowing her disability to relegate her to the fringes of a world designed for the able-bodied, she has set out to make that world more accessible to people like her. “My parents never saw my disability as a negative,” she says, acknowledging that their attitude was both exceptional and formative. “They just said: ‘tell us what you need.’ ” 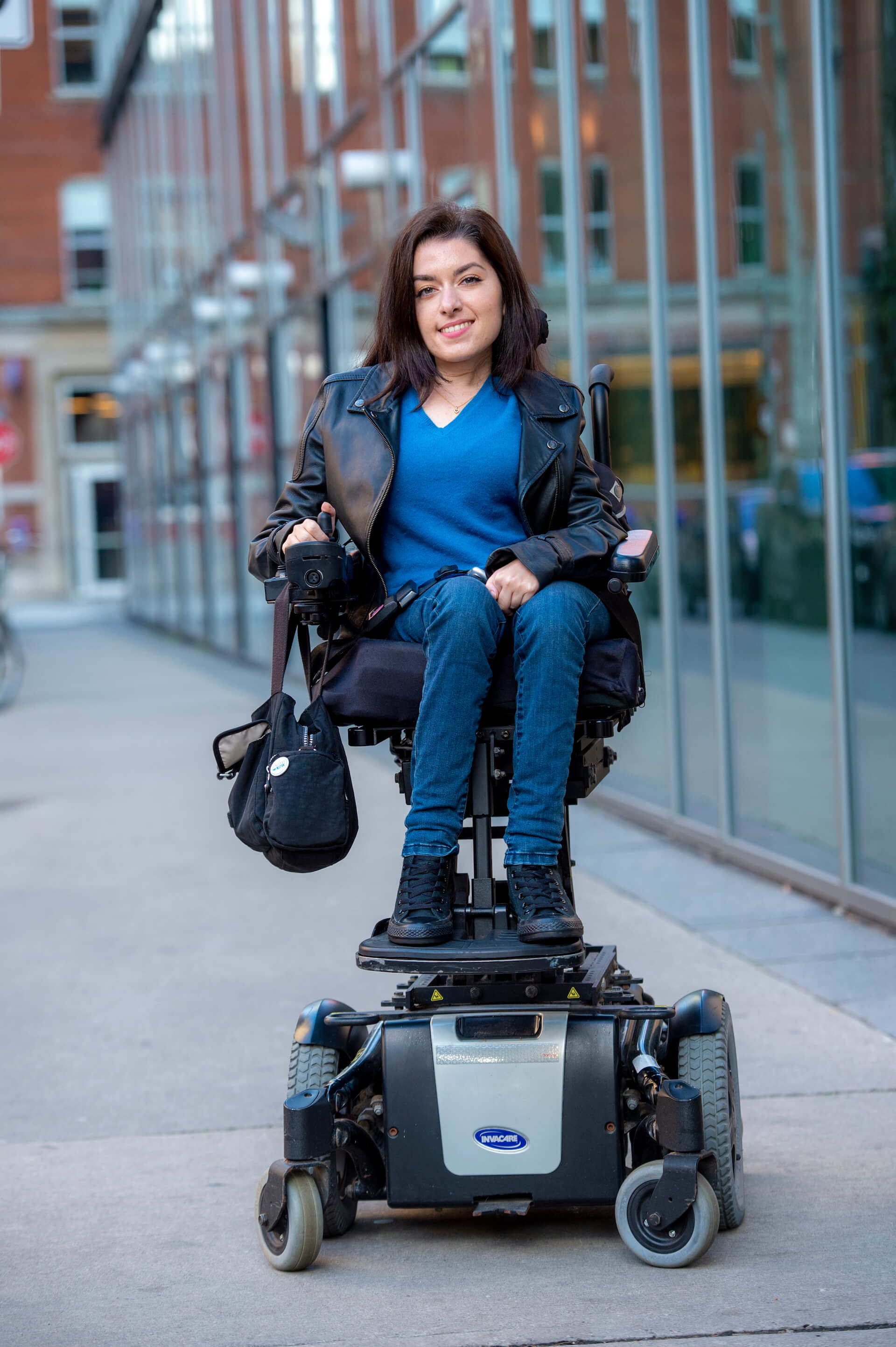 She did. As the only visibly disabled student at her elementary school, in a northern suburb of Toronto, Maayan remembers watching her parents help build a wooden ramp from the kindergarten playground into the classroom. At her next school, she watched them help build a much more significant ramp from the first to the second floor.

“I learned at a very early age that either I needed to adapt to my environment, or it needed to be adapted to me,” she says. As an adult, another realization took hold: that things don’t have to be this way; that if accessibility were a priority and not an afterthought, she wouldn’t need to constantly ask for help.

While Maayan was studying photography at Ryerson University, she applied for a job at a local agency. She was invited to an interview, but the agency was unable to get her upstairs to its offices. She had to do the interview on a busy sidewalk in downtown Toronto. It occurred to her that this kind of experience was avoidable.

If accessibility were a priority and not an afterthought, she wouldn’t need to constantly ask for help.

With the help of some tech-savvy friends, Maayan set up a simple interactive website that mapped her environment — Toronto — with accessibility in mind. Anyone using the site could add pins to the map, indicating accessibility-friendly places, steps, obstacles, alternative entrances, braille signage. The feedback was overwhelming and positive.

Maayan’s idea — which she called AccessNow — was accepted into Ryerson’s Digital Media Zone incubator, and with crowdfunding and the help of more friends, she was able to convert the website into an app. That was in 2015. Today, AccessNow employs six staff members at its office in downtown Toronto and the app features ever-expanding maps for urban centers in 34 countries.

There is much to be learned from them: where to find the key to the accessible bathroom in Berlin’s trendiest nightclub; the name of a particularly helpful lifeguard on Tel Aviv’s Gordon Beach; how to navigate Toronto’s Union Station if the elevator breaks down. And, as the prevalence of red thumbs-down pins suggest, there is also much to be improved.

She says the most motivating aspect of her work is the gratitude of users, who often write to her.

These challenges spur Maayan on. She says the most motivating aspect of her work is the gratitude of users, who often write to her. They explain how empowered they feel by a tool that has been designed specifically for them; something that reduces anxiety as they navigate the world and makes them feel part of a larger community.

While her first passion remains photography, Maayan doesn’t feel she’s sacrificing anything by devoting herself to entrepreneurship and advocacy. AccessNow enables her to travel and her camera always travels with her.

“I won’t stop as long as I feel that I’m making a difference,” she says, pointing out that what she is fighting for — equality — is a basic human right. 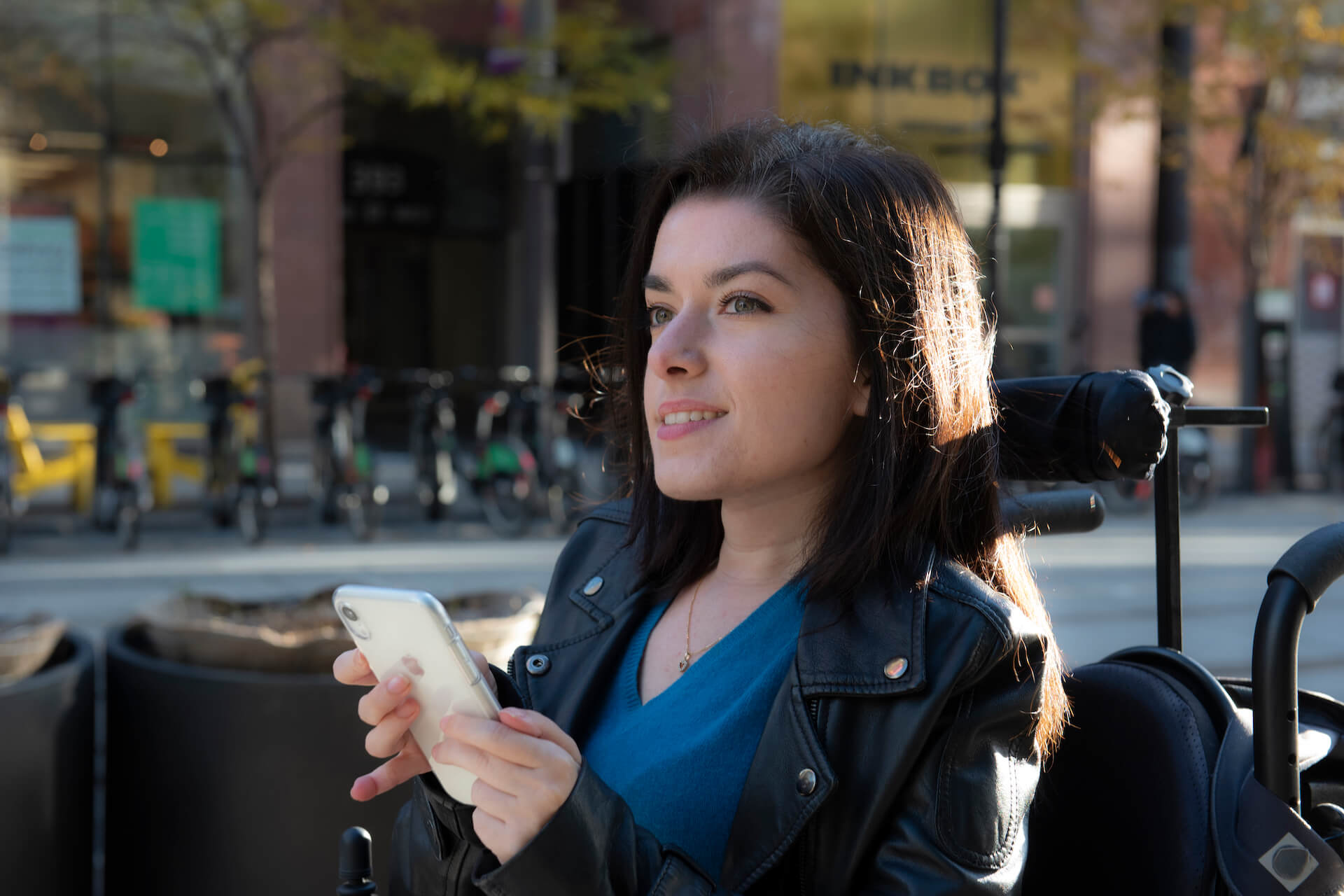 “We’re not there yet, but a lot of organizations are raising the bar,” she says. In her frequent speaking engagements, Maayan asks audiences to reconsider the way they think about accessibility: not as a technical fix, but a change in mindset from which everyone stands to gain. “When people see it as a competitive advantage, they buy in.”

1 in 5 Canadians (6.2 million) aged 15 years and over had
one or more disabilities that limit their daily activities.
90% of Canadians agree that accessibility for people
with physical disabilities is a human right.

90% of Canadians feel that Canada should make it a priority to ensure that everyone can fully participate.
59% of Canadians with disabilities aged
25 to 64 are employed compared to 80% of those without disabilities.